A Wedding, A Christmas Wish, And Spellbound Cake... 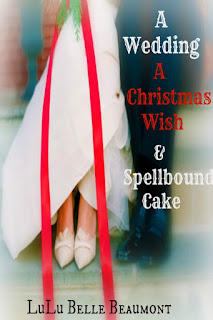 A fake wedding proposal a few days before Christmas leads to Jynx Jingleberry and Sully Scaggs starring in a reality wedding show.
Jynx Jingleberry is no stranger to drama – a struggling fashion designer who was kicked off Project Runway for spilling wine on Tim Gunn and almost starting the Project Runway apartment on fire, is accident prone and has resolved to prove to her parents and the residents of Sugar Hollow Harbor that she is capable of success.
Scully Scaggs owns Scully's Pizza Palace and could use the 50 thousand dollars offered by the host of Wedding Games, Cooper T. Thompson, to help his pizza business and fund some of the crazy inventions he's dreamed up.
Cooper T. Thompson hates his job as host of Wedding Games – but he is up for a job at ESPN, and if he can win the ESPN producer's wife over, he'll have the job he's always dreamed of.
And then there is Moxie Baker – waitress at the SpellBound Café who has discovered a little magic of her own – and she believes Jynx and Cooper belong together and conjures up her own little spell to bring the two together, despite the fact they can't stand each other.
A Wedding, A Christmas Wish, & Spellbound Cake is a romantic comedy that may just contain a little bit of holiday magic.

Available at Barnes and Noble Nook for .99 cents

Available at Amazon for Kindle (2.99)