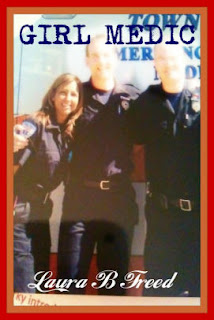 In the summer of 2017, one of my oldest friends and former EMS partner, Darin Daley,  (who had since gone on to become a cop), wanted to know how he could "gift" my book Girl Medic to a female co-worker that he also happened to be seeing secretively.

Darin had never cared about my book before, other than reading it and calling it good. He never left a review for it or tried to get anyone else to buy it.

It didn't take me long to realize that he wanted her to read it because there were many stories about Darin throughout the book. I had warned Darin many times that the co-worker he was interested in was leading him down a wrong road. And that he should be old enough and certainly wise enough to understand.

Unfortunately, Darin was arrested twice in the year 2018. Spent some time in jail. Though I knew his flaws, (we all have them, believe me, I'm not perfect), I did not ever imagine that his flaws would over-take his common sense and that he'd lose everything.

This is an updated version of Girl Medic. You'll find the story of Darin's  shocking, sad, unraveling in the last chapter.

I tried to a year to help him. But it's impossible to help someone, when they do not want to help themselves. I'm sure there isn't one person that knows Darin that isn't pulling for him to rise from the ashes, leave toxic situations behind, and take his skills and put them to good, productive use.